At the Habitat III - United Nations Conference on Housing and Sustainable Urban Development held in 2016, the New Urban Agenda was proposed and passed, which aimed to build public space that is “safe, inclusive, accessible, green, and quality”. To achieve this sustainable development goal, the People’s Government of Wuhan and UN-HABITAT signed a memorandum of cooperation on improving urban public space in 2016 and 2017 in a row. As planned, Wuhan Land Use and Urban Spatial Planning Research Center (WLSP) and UN-HABITAT prepared "Public Space Assessment of Wuhan Jianghan District (Pilot)" and "BLOCK BY BLOCK - Minecraft Workshop” together in 2017.

Objective of the practice

How to effectively respond to the Sustainable Development Goal / 2030 Agenda
First, outstanding natural endowment lays a solid foundation for optimizing public space. Jianghan District is richly endowed for the presence of most lakes in Hankou, including West Lake, North Lake, Lingjiao Lake, Houxiang River, Mengze Lake, etc., which are known as Hankou Lakes.

Small land and high population density make Jianghan a typical high-density urban area in China and even Asia, and assessing its public space can be a great example.

How to deal with challenges and overcome difficulties.
First, limited public space and low per capita index. Land available in Jianghan District is not enough for its huge population, and its per capita indexes are below national standards. Per capita public space of Jianghan District in 2017 was 2.22 m2/person, lower than Wuhan average of 8.9 m2/person, way below the national standard for ecological garden city.

Fourth, unattractive public space with poor accessibility. Public space coverage is 78% within a 500m radius of point-like public space, and only 88% within a 1,000 m radius. At the same time, few entrances and exits and poor construction quality results in a lack of vitality in existing public space.

Fifth, unmemorable public space with below-expectation quality. Large-scale parks are not easily visible and accessible, and the space in key areas is negative, with low utilization. Pilot public space are not iconic enough.

WLSP and UN-HABITAT entered into a memorandum on optimizing urban public space, and the two prepared the project. To start with, WLSP trained over 40 college students on public space training and a questionnaire survey followed; during the planning and construction stage, the public was invited to offer advice, and over 120 representatives of office workers, residents, and students were gathered together for three public space planning and design activities held in 2 days, in order to pool good ideas to guide the construction

Implementation of the Project/Activity

WLSP signed a memorandum of understanding with Joan Clos, then Executive Director of UN-HABITAT. Both agreed on extensive cooperation to improve urban public space. On July 24, 2017, Mr. Joan Clos, Sheng Hongtao, Director of Wuhan Natural Resources and Planning Bureau, and Wang Xiangwang, Vice Mayor of Wuhan, released the Chinese version of “New Urban Agenda” and announced the start of China Urban Public Space Transformation Project. Mr. Clos and Director Sheng Hongtao unveiled the training base. The two sides continued cooperation in 2017, including assessing the public space in Jianghan District, and using “Minecraft” for participatory design of public space in the forest of Xibei Lake in Jianghan District.

As agreed, both established a technical team. WLSP was responsible for project coordination, and both prepared the questionnaire together. WLSP undertook student training, on-site investigation and data collection, while UN-HABITAT analyzed the data. The public space assessment report was completed by both. For the Block by Block Minecraft Workshop, WLSP was still the project coordinator, responsible for selecting the public space, communicating with government departments, selecting venues, and gathering residents, office workers, and students. UN-HABITAT established the model of the pilot public space. Both participated in progressing the Block by Block Minecraft Workshop event and preparing the report. To ensure desired results and progress, a leading group was jointly established to review project results and progress, and to solve problems that emerged.

I. Assessing basic and quality indexes of the public space
As guided by the “New Urban Agenda” and UN-Habitat's relevant standards, the current public space was assessed in a systematic manner to construct a public space indicator system with Wuhan characteristics.
1. Basic indexes
• 141 locations counted as effective public space;
• Per capita public space area of 2.2 m2/person in 2017;
• 76% are urban or community parks; 62% are at street/residential quarter level;
• 65% are managed by government departments;
• 86% was built under urban planning;
2. Quality indexes
(1) Accessibility
• Road network density is 7.2 km/km2, and roads are dense in the south and sparse in the north, and roads account for 21.8% of total land;
• 54.4% within a walking distance of 400 m (5 minutes), and 82.7% within a walking distance of 1,000 m (10 minutes);
• 86% with unrestricted access, and 41% with bicycle parking spots;
• Only 19% of public spaces is of good accessibility; only 5.7% are accessible to the disabled.
(2) Inclusiveness
• 57% with single function, and 22% with complex functions;
• 46.8% of users are women and 53.2% men.
(3) Safety
This index evaluates crime rate, lighting system, monitoring system, and site flatness. 12% with potential safety hazards; 6% with traffic accidents; 9% with crimes; 64% with video surveillance systems.
(4) Quality
• 87% makes people comfortable with a good view;
• 11% with garbage disposal, 14% with unpleasant odor, and 56% with clean water;
• 24% with comfortable seats, 43% with comfortable shading facilities, and 23% with good garbage collection facilities;
(5) Greening
• 56% with hard pavement, 73% with grass, and 89% with forests;
• Per capita green area of 7.5 m2/person in 2017;

II. Guiding strategies
Jianghan District aims to build a green public space example that is small but refined with excellent quality and diverse styles, and which will be a highlight as Wuhan constructs its ecological civilization construction and develops green economy:
1. Quality over quantity
Due to high population density and serious shortage of land, the priority should be optimizing the quality of existing public space, and next comes increasing the total amount of public space.
2. Building a connected network
A well-functioning public space network should be established, ensuring that all residents can reach the public space within a 10-minute walk.
3. Enabling vitality and diversity
Diverse public spaces should be created in a variety of ways, which can be utilized to enhance urban vitality and inclusion.

III. Advice
Based on the results of public space assessment in Jianghan District, public space planning and design guidelines were formed to guide the planning and construction with respect to safety, accessibility and inclusiveness.

IV. Practice - Block by Block Minecraft Workshop
The small forest in Xibei Lake was selected as a pilot for “Block by Block” Workshop. Minecraft Mexican technical team built in Minecraft a model of the small forest in Xibei Lake. More than 120 people of all classes, including residents, middle school students, and office workers, participated in the event. WLSP made a list of supporting facilities prepared by the public hopes and integrated it with the final project execution plan.

I. Enabling factors- the project’s success was attributed to: “government support, teamwork, and public participation”
1. Government support. Strong support from the government has secured the smooth progress of the public space assessment and BLOCK BY BLOCK Minecraft Workshop. In the preliminary research stage, the government provided relevant planning materials and cooperated with the project team for field investigations; in the participatory design stage, venues of 40 people and computers were provided for three public events in two days; In the planning and construction stage, the design team was urged to assimilate public opinions in preparing the final planning and design plan. The project was completed and open to the public in early 2018.
2. Teamwork. WLSP and UN-HABITAT established a team that leverages respective technical advantages. The two discussed on project ideas and activities, and worked together closely to complete the public space project with high efficiency and high quality.
3. Public participation. The joint efforts of all stakeholders contribute to the success of BLOCK BY BLOCK Minecraft Workshop. Firstly, the government departments and community offices encouraged residents to take an active part in the project; secondly, education authorities organized primary and secondary school students to apply for the event; thirdly, posters were published to recruit office workers and intellectuals. More than 120 people of all classes, including community residents, primary and secondary school students, and office workers joined in the two-day public space design event, and the project team integrated their suggestions into the final planning and design plan.

II. Constraints -- By gathering wisdom and building consensus, the project team adopted a new on-site research method to evaluate public space in the region
1. Discussions were organized to define the assessment targets. Public space may be understood in a broad and a narrow sense. Discussions were organized to determine targets of the public space assessment: open public space overground, including city parks, community green spaces, streets, train station squares, and community pocket parks.
2. A systematic survey was conducted to collect and screen the samples. To ensure a scientific assessment, a systematic survey was conducted to collect samples across the public space in the district, including 13 streets, 163 data points, and 341 boundaries. With a full-caliber survey of such factors as types, quality, distribution and accessibility, safety and comfortability, 141 public spaces were confirmed effective, covering an area of 2 km².
3. A new research method was adopted and promoted through systematic training. By organizing over 40 college students for both questionnaire and interview, the project team creatively used Kobo TOOLBOX APP to which a pre-designed questionnaire was uploaded so that the respondent could easily record the location, scale, environment, facility usage, and noise of public space in a real time manner. The app would output the final results in the background after data screening.

First, to build an indicator system with Wuhan characteristics to evaluate public space. As guided by the “New Urban Agenda” and UN-Habitat's relevant standards, a distinctive "4+5" indicator system for public space evaluation has been developed. The indicators include accessibility, comfort, inclusiveness, and safety.

Second, to adopt research methods based on big data. The survey abandoned the traditional method of paper questionnaire, and adopted a mobile app KOBOTOOLS for the first time to accurately record the data (e.g. noise, location) of public space and output the final result in the background. The method is also applicable to the planning of other public space projects. WLSP will serve as a base to cultivate talents necessary for public space improvement in China.

Third, to make the first attempt in China of community participation. People at different ages (8-65 years old) and strata (community residents, commuters, primary and middle school students) were invited to express their ideas by giving their design plan on “Minecraft”. Goods ideas and techniques for public space design would be incorporated into project practices.

On the morning of July 24, 2017, Mr. Joan Clos, UN Under Secretary General and UN-HABITAT Executive Director, announced in Wuhan to launch China's project on urban public space improvement. The moment was witnessed by representatives from several domestic cities. Since its launch, the project has received extensive attention from media and the industry, being widely covered by some authoritative newspapers and TV stations. A small forest in Xibei Lake, the first pilot project with public engagement, was put into operation in January 2018 and was well-received by local citizens.

The project achievements were published at the 9th World Urban Forum in Kuala Lumpur, Malaysia in February 2018, attracting global attention. As agreed by the expert panel, the improvement of public space is particular important to Wuhan, a Chinese city typical for high density and rich historical legacies. As the training base of UN-HABITAT in China for public space improvement, Wuhan has made many efforts and remarkable achievements in public space construction. Its experience is of great significance for other cities to develop and implement city planning scheme 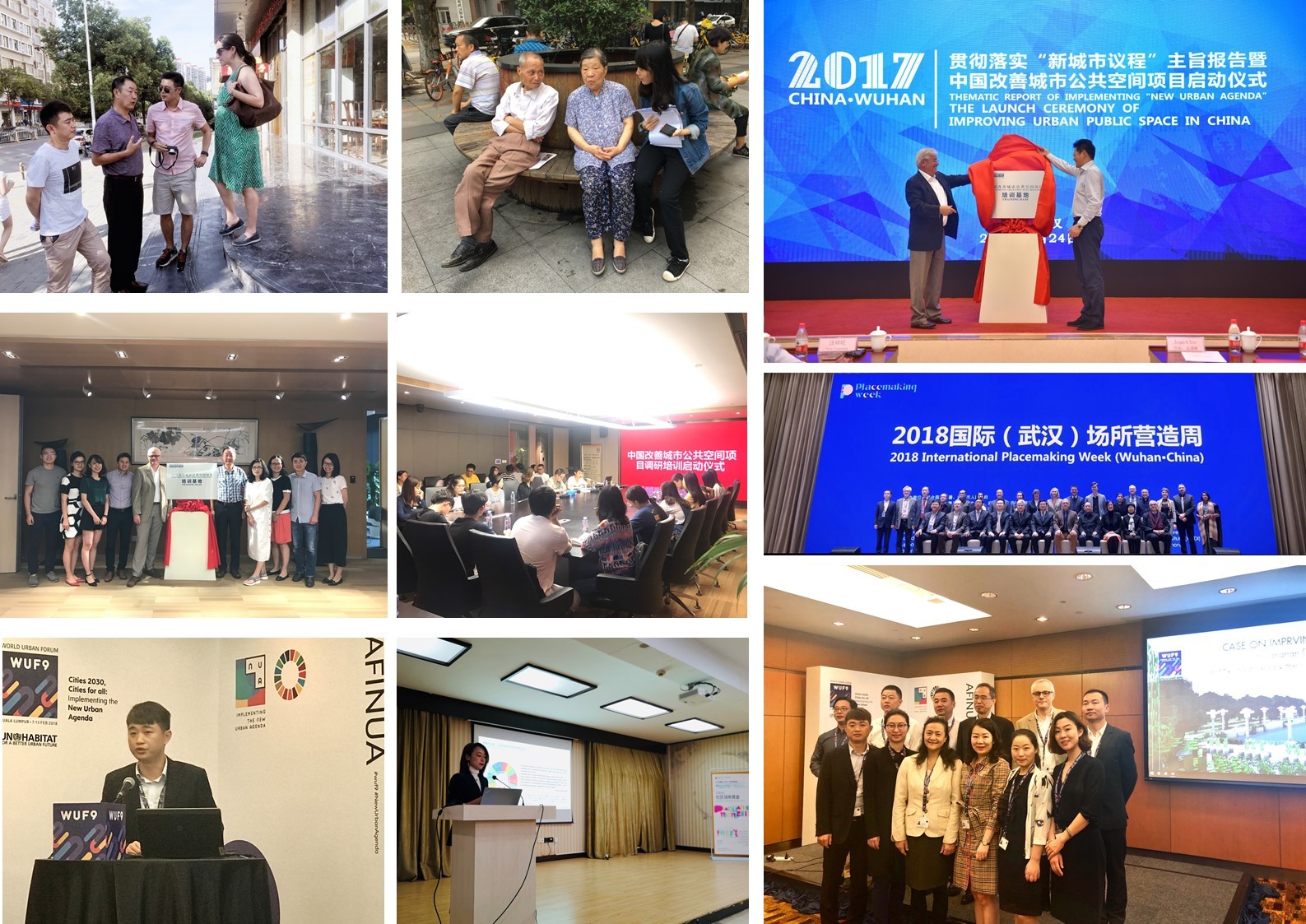